This year, I finally had the station and wherewithal to operate Winter Field Day 2022 representing Four Lakes ARC. I had other priorities on Saturday, but Sunday was just a matter of getting started early enough. Waking up, showering, gathering the station components, and transport to the local park I had in mind left me with barely two hours of the event remaining. Arriving at the scenic overlook of Madison's Hoyt Park before the rotating groups of, ah, recreational smokers, started happening gave me easy access to the benches in the park to be my operating position.

No question about it, this is a 1 Oscar station; no walls to separate me and my one radio from the outdoors!

A balmy 22-27 F according to the car outside air temperature, setup was nice and quick after the practice (and tuning) of the antenna the night before on the sidewalk of my apartment. Checking the tuning of my one-measurement/one-cut design technique resulted in performance right where I needed it on 20m:

From there it was off to the races listening for SSB stations running a frequency. I worked my way down 20m from 14.350 after finding no immediate callers on the Extra portion of the band. That first countdown to about 14.180 took me at least an hour and a half. Maybe not the most efficient method of pouncing, but that's what I did, unassisted and in the cold. By total happenstance, popping back to the top of the band got me NQ9A, the FLARC Secretary and one more before 1900Z hit.

Never to waste a good opportunity (despite the temperature of my toes and contents of my bladder), I skipped over to Parks on the Air to grab some spots and hunted four parks before it was time to go QRT myself and get back home.

Before breaking down, I grabbed a picture of the connection point of the wires for my antenna.

And another view of my operating position:

Overall, I net 15 contest contacts and four POTA contacts over two and half hours of operating. Very good for a first run in the cold and cloudy. Outdoors, emergency power, and away from home net me most of my event points, but that's what they're for, right? Other wire antennas for the pole to provide additional band agility should be straightforward. Then it's on to more portable operation!

Thanks for the contest and 73!

Popular posts from this blog

May 18, 2021
Trying to get my FT-818nd working on FT-8 was an adventure. After much poking, then complaining and receiving choice hints on freenode's ##hamradio (find us now on Libera 's #hamradio), I was able to come to the following conclusions that got me able to both decode and be spotted (no contacts, yet).
Read more 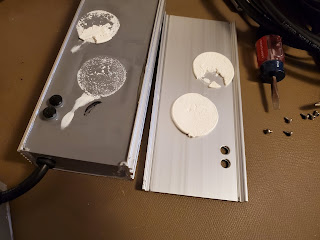 Last left off in the preview "teardown" despairing over the potting was my failed MEAN WELL HLG-320H. Then came a great need for mindless stimulation after a day of work and I tried cracking the case again. After the successful prying came picking and cutting away at the potting material to see what's what. Here's what's inside! Image warning: there's a lot to get through this whole device. Click on the photo for the full Blogger resolution. There you go, just a bit more force and the top plate comes off.
Read more